Siddhartha Agrawal: Job search in the time of Corona

The global Corona pandemic posed many new and unexpected challenges for job seekers in 2020. This was also the experience of Siddhartha Agrawal. Although the IT security specialist was well-prepared when he got his job seeker visa, his further journey did not at all turn out as planned. In this interview, he talks about his success strategy for getting job offers, unexpected bureaucratic hurdles, and the virtue of taking the more difficult road.

ProRecognition: Siddhartha, when did you decide that you wanted to migrate to Germany and what was the reason behind that?

Siddhartha Agrawal: There’s no strong reason why I decided to go to Germany. Way back in 2004, when I doing my B.Tech in IT, I interacted with some Germans. It impressed me how they worked and did their everyday tasks. Somehow, I got an inclination that Germany is probably the right place for me in the future. However, I seriously started preparing for Germany only in 2015. While doing my MBA in IT, I utilised the time to improve my German skills. It took five years and me completing B2 before I actually went to Germany.

That’s quite a long time. In fact, it was only in 2019 that you approached ProRecognition.

That’s correct. You know how it happens: To your destination, there are always two ways. One is a cakewalk and the other one is the rough road. To the best of my experience – and I have 14 years of work experience – the cakewalk leads you nowhere. You’ll only end up shelling out money, and all you get are false promises and maybe fake interviews. But then, I contacted ProRecognition and also researched online a lot. We certainly require someone who is not profit-oriented and won’t give you false promises. IGCC never offered me any false promises. They never said: “We are going to put you to your destination”. Instead, they advised me on how to best prepare and what possible roadblocks I could face. Therein I found that ProRecognition is genuine and that the team would give me real guidance.

And then what happened?

I was very fortunate. I was one of 22 candidates who were invited for a one-day workshop in Pune in July 2019. That was a real eye-opener. I never knew I was making so many mistakes in my resume and cover letter! Although I had done quite a lot of refinement based on my own research, the workshop gave me the final touches. I’m of the opinion that I could gather some interviews just because of these finishing touches.

So how soon after you attended the workshop did you start seriously applying for jobs?

It wasn’t like that. Even before attending that workshop, I seriously applied for jobs. However, I observed that out of the 100% effort I put, only 50% was actually effective. The other 50% were without results because of my mistakes or some other reason. But once I completed the workshop, I become 80-90% effective. And I could see from the responses that employers were more interested in getting to know me more. Instead of just saying “We’ll get back to you once there is a suitable vacancy”, they called me up even if there wasn’t a vacancy and tried to interact with me.

The long wait for a job seeker visa

That’s indeed a big step forward. Was this the reason why you decided to go on a job seeker visa?

Actually, only two days before the workshop I had already gone through my job seeker visa interview in Mumbai. So, I would have flown to Germany anyway. However, I felt that after attending the workshop, I was better prepared to search for jobs on-site in Germany.

And when did you actually fly out?

It took a lot of time. After my interview, it took precisely 126 days till I had my visa in hand. However, even then I still waited a bit and flew out only in January 2020.

That’s generally a good time to fly. Typically, from the mid of January hiring starts in full swing.

Exactly! That is what I had planned for. I had resigned from my previous job almost a month prior to that point and was sitting at home. But I knew that Christmas time wasn’t the right time to go there. Therefore, I planned to come to Germany only in January.

Within two weeks to a job offer

So, what happened once you’ve landed in Germany?

As I said, before coming to Germany, I had already gone through multiple online interviews. But because I wasn’t on-site at the time, I was rejected after almost every interview. But then, it struck me! Even if received a rejection before, I should still connect with them and tell them that I’m in Germany now. If they find some time and still find my profile interesting, we could have a face-to-face interaction. So, after I had resigned from my job and was at home, I was sending emails to all possible recruiters. And you wouldn’t believe it, this strategy worked out! In only the first few weeks after arriving in Germany, I was able to arrange three face-to-face interviews. At that time, there were hardly any Corona restrictions. So, many recruiters actually insisted on face-to-face interviews. The fourth one was with Altron, which is now Capgemini, in Hamburg. And so, on 14th January I arrived in Germany and on 30th January I signed a job contract with them.

The next hurdle: Work permit

Unfortunately, getting your work permit didn’t go as smoothly as your job search. At that time, you reached out to ProRecognition because you couldn’t get an appointment at the Foreigner Registration Office in Berlin.

(laughs) Yes! That was a nightmare! In Berlin, you need to book an appointment online. But – possibly due to Corona – there was no appointment available in 2020 or 2021. Only in 2022, there were appointments available. The only alternative was queuing up in the early morning to get a chance to meet the Foreigner Registration Office. Through this, I ended up with an appointment one month away.

So, would you advise “Better don’t go to Berlin”?

I don’t know if it’s only in Berlin or not. However, getting a job in Germany is not your target, starting that job in Germany is. And there is a big gap between the two. Even after standing for five or six hours every day, I was able to only get an appointment after another month, at the beginning of March 2020. And even then, I hadn’t reached the goal yet. When the day of my appointment had finally come, the clerk just took my documents and said that they’d get back to me. There was no option for a faster procedure. So, I started emailing them. But after a while, I received a response from the office to please refrain from sending update requests so frequently. Eventually, I got my work permit on 31st March. But by that time, the first Corona wave had hit Germany.

Back to square one

Did you lose the job offer?

Actually, that offer was not exactly off the table. The company still wanted me. However, they said now that this pandemic has come, they didn’t have funds for this position. Most of the staff actually had to reduce their working hours. So, they put me on hold. They said: “We can’t do anything, but we still hope for you to join us later.” The recruiter even sent me a greeting card for Easter. But I understood that things are not going to work out as planned. Consequentially, I started applying for other jobs. And fortunately, the next job that I got was where I’m working today also.

Did you experience the same difficulties with the work permit?

Luckily, I didn’t. When I got the other job offer at the beginning of May, I immediately applied to the Foreigner Registration Office. I really worried that I would lose that job, too, and requested them to please process the application quicker. Fortunately, due to my first work permit, my documents were already there in the system. Thereby, the second time around, it took less than two weeks. So, in the mid of May, I could get my work permit. And then I moved to Cologne and joined Spike Reply GmbH as an IT Security Consultant from 1st June.

How was your experience after moving to Cologne?

When I moved to Cologne, I was like burned corn because of the bitter experiences I had made till that point. But when started my job, I couldn’t believe that these people are so nice. They are so helpful and so understanding. I mean, for me it was the first time I had ever stepped out of India. Overall, I find living in Germany very exciting and comfortable. The only thing is that language plays a major role. Only because of my language level was I able to settle.

You’re an IT expert. Does German still play a big role for you at your workspace?

Absolutely. Let’s say we’re no longer in Germany, but in a city in the USA, and we don’t speak English. How will the situation be? There will be a concrete wall between us and our colleagues or us and the general public. The same applies here in Germany. Germans do speak English, but – I don’t know why – they seem to not like English. In my workplace as well, I have a couple of colleagues from India who don’t speak German. I could see that my German colleagues when interacting with those colleagues, they’ll be talking only from point to point: “What did you eat today? What did you learn today?”, something like that. But when you interact with them in German, then they’ll open up. They’ll talk about their neighbours as well, they’ll talk about their past experiences, future plans – they’ll open up about everything.

“German is a bridge”

What about outside of work: How did knowing German help you settle in Germany?

I’ll give you one example: Once I went to a supermarket with my friend. He doesn’t speak German, only English. What happened was this. My friend asked a sales lady who was arranging some stuff where he could find a certain deodorant. We went to the place she had instructed but still couldn’t find what we were looking for. Since there was another sales lady, we repeated our question about the deodorant to her. However, maybe because we spoke English, the second lady abruptly said: “My colleague has already told you. You have to search it yourself now.” Almost three weeks later, it so happened that I went alone to the same supermarket. The second sales lady was sitting at the cash counter. I was standing in line with my grocery. Somehow, I dropped a yogurt bottle which spilled all over the floor. Since I’m fluent in German, I immediately offered to clean it. But the sales lady refused in a really friendly manner. I requested her ten times saying it’s my mistake, but she wouldn’t allow me to assist her clean up. I take it that probably language changed her attitude or behaviour. That’s my understanding. (laughs)

Siddhartha, thank you for sharing your experience with us.

(The interview was conducted in February 2021) 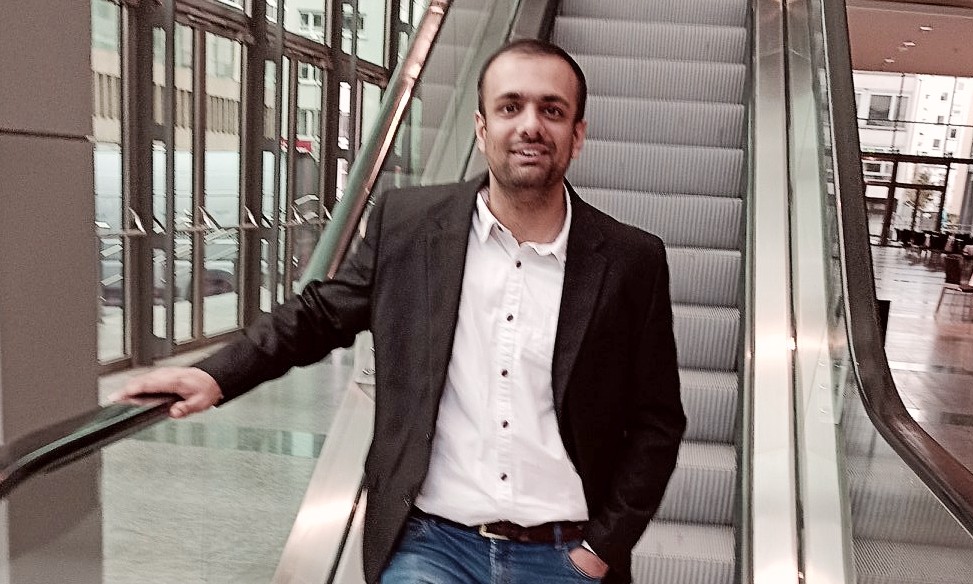